Sustainable agriculture implies solving not only problems of food production but also environmental problems. The diffusion of progress and the evolution of techniques should allow the solution of some of the problems of mankind without any tension or catastrophic events. However, as with any scientific breakthrough, new pesticide knowledge is often applied too fast to solve practical issues. If pesticides could be as effective as claimed by manufacturers, they should contribute significantly to the satisfaction of human requirements.

The International Meeting entitled "Crop Protection" was held in Aix-en-Provence, France, and organised jointly by the "Groupe Français des Pesticides" and the "Mediterranean Group of Pesticide Research". During the opening session Drs. Paolo CABRAS, Michel MONTURY and Jean François COOPER quoted: "Semantically, this word "pesticide" should seem more "positive" than certain other terms such as "biocide" or even "antibiotic", which, based on current usage, is a far more acceptable term, notwithstanding the fact that both terms simply refer to potential biological activity. The reasoning behind this may simply lay in the general subconsciousness - the first affects man via his food whilst the other two supposedly affect only parasites. The reflex is entirely human - what is harmful is bad, what is beneficial is good, or so it would seem! And yet, if we turn the clock back just one or two centuries, these "pest eradicators", capable of saving our harvests and, no doubt, our lives as well, would have been welcomed with open arms. More recently, when the potato colorado beetle, downy mildew or powdery mildew threatened to wipe out our harvests and our heritage, we survived the use of agrochemical products quite well. What's more, they are put to good use, replacing certain jobs in the fields, and therefore making our lives that much easier."

But the overconsumption of pesticides, largely supported by the agrobusiness, has and will have major impacts on ecosystems. The ecological consequences are not yet fully known for several reasons such as the lack of knowledge on the behaviour of pesticides and their metabolites in complex ecosystems. Moreover, few impact studies have been undertaken in specific crop production areas such as crops under Mediterranean climate. The selected articles of this meeting highlight the need to conduct more investigations into the interactions, the reactivity and the transfer of pesticides. 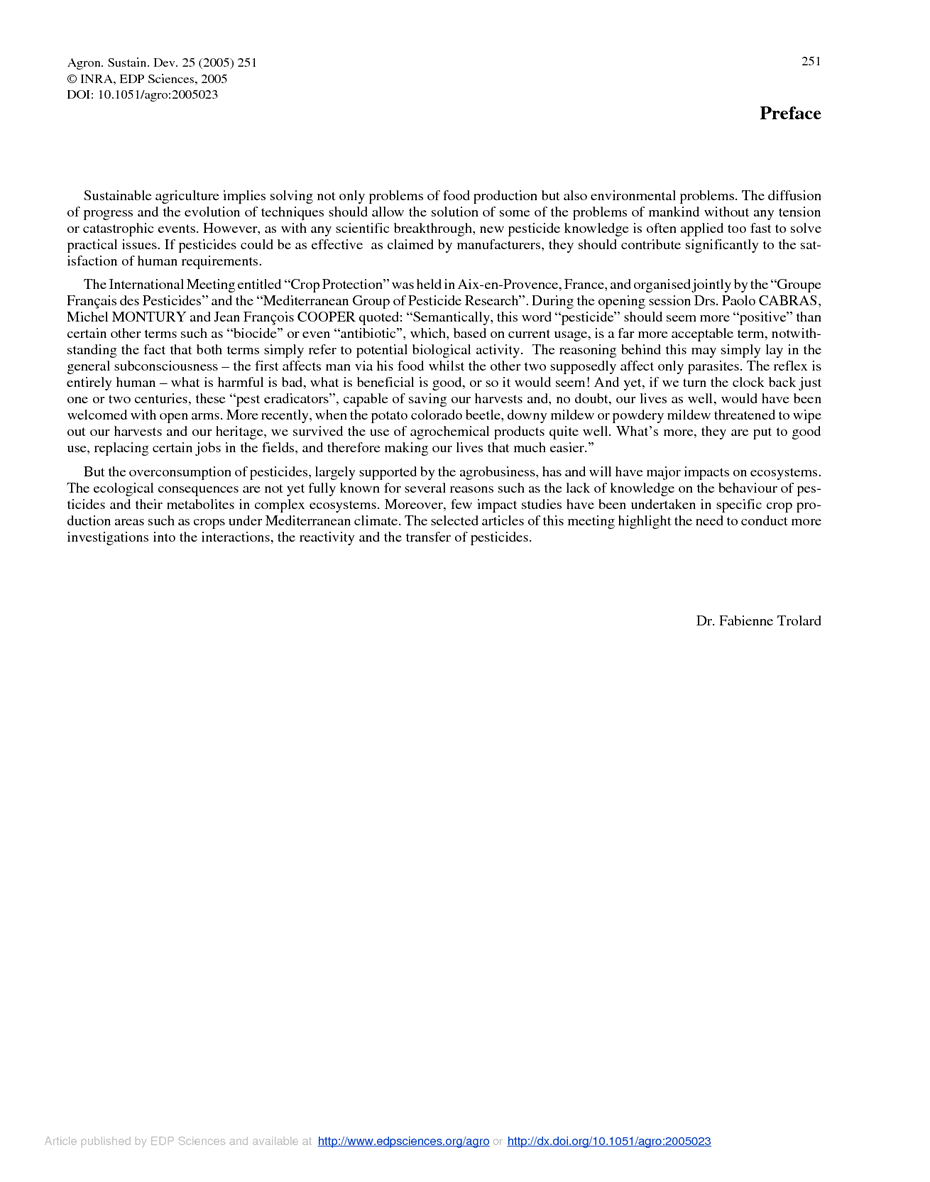